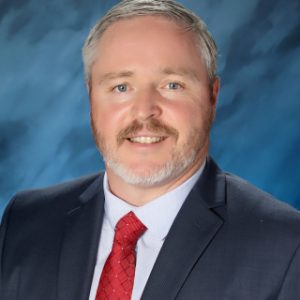 Brandon Tauscher begins his first year as Principal at the Power campus after serving last year in the role of Assistant Principal. Mr. Tauscher brings a range of experience as an educational leader. Starting his work in education with Teach For America, whose mission is to “enlist, develop and mobilize our nation’s most promising future leaders to grow and strengthen the movement for educational equity and excellence”, Mr. Tauscher has had a positive impact in the communities he has worked, including receiving an Apache County Teacher of the Year Award and a 2A Conference Head Football Coach of the Year Award. Mr. Tauscher began in educational leadership in 2014 as a school athletic director and was promoted to district athletic director before joining San Tan Charter.

He has also worked outside of the schools as a non-profit leader and spent time working in community outreach and public relations. Mr. Tauscher is married to his wife, Lauren, who is an educational leader for the Phoenix Union High School District and the couple is the parents of four boys: Peter, Lewis, Andy, and Henry. The Tauscher family stays active participating in youth sports programs and enjoys the outdoors and traveling to visit friends and family.

Raised in a small and supportive community in the Pacific Northwest, Mr. Tauscher believes that his background and systems thinking approach he learned on his family’s working tree farm also works well in education: “Actions affect each part of the system. Just like sound forestry practices play out economically and socially within a family and community when high standards in education meets the social-emotional needs of students, we find balance and can build something that lasts”.

These are A Few Of My Favorite Things…..